'My baby was blind. She couldn't eat or speak. I mourn for her' – families' heartache over Falluja birth defects 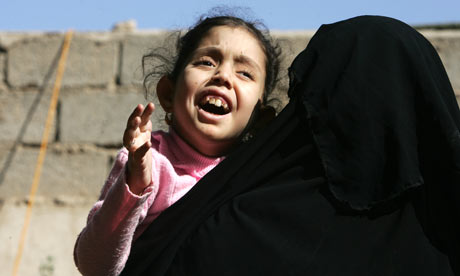 Zainab Abdul Latif moves wearily between her three children, wiping their foreheads and propping them up in their wheelchairs. "Every day, they need intensive care," the 29-year-old Falluja mother says. Neither her two sons, Amar, 5, and Moustafa, 3, or daughter, Mariam, 6, can walk or use their limbs. They speak two words – "mama, baba" – between them. All are in nappies.

Zainab is one of many faces of Falluja's postwar years, overwhelmed by a workload that she has no means to change. "They cannot eat, or drink by themselves and every day I have to take Mariam to the hospital. She is very sensitive to flu and regularly gets diarrhoea and other ailments. The doctors have told me they are mentally retarded and have nerve paralysis. They say it is congenital. I really can't take care of them like this and I need help."

One of few people she can turn to is Dr Bassem Allah, the senior obstetrician who is chief custodian of Falluja's newborns. During medical school he had to search Iraq for case studies of an infant with a birth defect. "It was almost impossible during the 80s," he says. "Now, every day in my clinic or elsewhere in the hospital, there are large numbers of congenital abnormalities or cases of chronic tumours."

He pauses, his thoughts seemingly interrupted by the gravity of his words, then slowly continues. "Now, believe me, it's like we are treating patients immediately after Hiroshima."

Across Falluja, neonatal wards and centres for disabled people are facing such an influx of infants or children aged under five with chronic deformities that they are fast running out of space and staff to help. After two years of anecdotal reports suggesting a spike in birth defects, more precise data is painting a picture of a deeply disturbing phenomenon.

The Guardian asked Dr Samira Abdul Ghani, a specialist at Falluja general hospital, to compile data from all the newborns she supervised over the three weeks from 11 October. She reported 37 cases of serious deformities, many of them neural tube defects [birth defects of the brain and spinal column including spina bifida and anencephaly], with accompanying heart problems. A sharp rise in the number of infant tumours is also being chronicled by hospital staff but, because tumours usually materialise months or years after birth, doctors are reluctant to quantify their research.

"There is ... a very marked increase in the number of paediatric cases of less than two years with brain tumours," said the hospital director, Dr Ayman Qais. "This is now a focus area of multiple tumours. We are seeing a very significant increase in central nervous system anomalies, especially neural tube defects."

Before 2003, he had been seeing sporadic deformities in babies. Now the frequency had increased dramatically. Most were in the head and spinal cord, but many were in lower limbs.

At Falluja General, doctors who care for newborns are dealing with phenomena none can explain.

The city was the site of the two most savage and prolonged battles in Iraq during the past six years. The potentially toxic residue of precision munitions that rained down on the city for up to two months in 2004 has left many medical professionals questioning the long-term impact of modern weaponry, although few are willing, so far, to directly blame the war.

Doctors point to many factors that could contribute to the birth defects: malnutrition, the psychological status of the parents, drug use, chemicals or radiation. Even preliminary treatment for the most common defect requires life-threatening surgery — a price too high for many parents.

Evidence is on display throughout Falluja's new general hospital and at centres for disabled people across the city. On 2 November, there were four cases of neural tube defects in the neonatal ward. Several more were in intensive care and an out-patient clinic.

"Many more fathers and mothers are refusing ongoing hospital admissions and, until recently, we did not record their children as having been born with defects," said Qais. "I tell parents after each diagnosis that they will need a shunt procedure, which will most likely lead to chronic swelling in the head and the need for surgery in the skull or brain, so the majority of parents are not taking this option."

Falluja's obstetricians said the significant rise in diagnoses of congenital defects was not explained by improving healthcare in the city. "We used to diagnose all such patients before the war," said Qais. "They were registered here and then sent to Baghdad for treatment, but we knew the health base of the newborn."

The story in Falluja is playing out away from the clinical calm of hospital wards. In homes across the city, the care needs of children with debilitating injuries are faced by families with no access to social welfare and little support outside their inner-sanctum.

Not far from Zainab's house, Um Omar is mourning the death three months ago of her three-year old daughter, Fatima, who was born with a second mass that protruded from her neck. She was known as the girl with two heads.

Allah, who treated Fatima, said that there was no chance of saving her life in Iraq. "The second 'head' was actually a tumour that contained part of the hydrocephalus and part of the brain. To save her needed highly specialised equipment that we do not have here."

Her mother still grieves for Fatima. "I'm sad about the death of my baby despite all the hardship she faced," she said. "She was blind, she couldn't eat, she had no oesophagus and never walked or spoke. She was my last child. All the rest were born before the war.

All four children were registered by the Falluja Handicapped Organisation, a rudimentary facility with little funding or means to provide other than moral support to the increasing numbers of families flowing through its doors.

The director, Hussain Matroud, said there were 300 children on his books. Many thousands more remained in the community, with their parents and carers refusing help. Some patients being treated for congenital defects at the centre for people with disabilities were clearly born before the start of the war, but the vast majority of children on the register were aged six, or younger.

"Most of the children have brain injuries and nearly all are under eight years," he said. "There were very few before the war. We are in constant contact with NGOs in America, India and Britain, who try to help with treatment. But all we can really do for now is compile their names and the extent of their conditions."

Mohammed and Rana Majid have a daughter, Zahra, who was born four years ago. She has been diagnosed with developmental disabilities stemming back to the pregnancy. The parents complained to the American military and received a compensation form to fill out. They have done so, but received no reply.

Several other families have lodged claims with the US military, but without a scientific case are unlikely to get far. Allah believes science has to start playing a role in explaining what has happened to the city and its young.

"The numbers of abnormalities we are seeing is horrific and no one has yet concluded why," said Allah. "There is not yet any science to tell us why. No one has come here to take soil samples, or make examinations. I think the Iraqi government does not want it proven that the Americans used forbidden weapons here. If there is scientific proof that the war was responsible for so many deformities, there will likely be problems for officials here."

US troops entered Falluja shortly after invading Iraq in March 2003, but it was the bloody assault some 19 months later that would become synonymous with the city. Operation Vigilant ­Resolve, in April 2004, was a response to the killing of four US private military contractors employed by Blackwater (now XE). On 8 November 2004 10,000 US troops and 2,000 Iraqi soldiers embarked on Operation Phantom Fury.

The US military called the fighting "some of the heaviest urban combat marines have been involved in since Hue City in Vietnam in 1968".

The US claimed to have killed 2,000 people, mainly insurgents, but produced no figures for civilians. Western media were kept out but accounts emerged of indiscriminate killing.

Iraqi medical officials and NGOs put the civilian toll at up to 6,000. Falluja's compensation commissioner said 36,000 out of 50,000 homes were destroyed, with 60 schools and 65 mosques and shrines. At least 200,000 civilians became refugees.

A doctor in Iraq has told Sky News that more and more children are being born with deformities in Fallujah, a city heavily bombed by the US in 2004. Lisa Holland's report contains pictures of children with severe medical conditions and deformities.